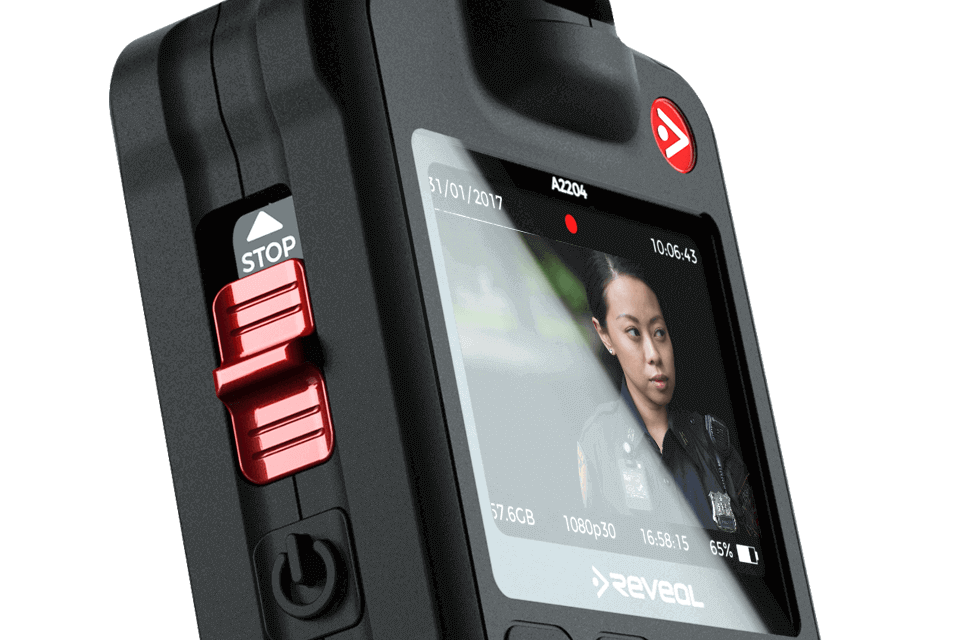 Recent events across the country have brought to light how fragile a community’s trust in the police can be. Unfortunately, years of service and hard, honest work can be undone in moments as single incidents disproportionately tip the scales of public opinion.

1. Our front-facing screens maximize transparency with the public

Reveal body cameras uniquely feature front-facing screens. The front-facing screen displays footage in real-time as it is being recorded and this demonstrates the police department’s open and transparent approach. By allowing the public to be able to join the police in seeing what is being recorded it creates an open relationship that helps to build trust.

Furthermore, an awareness that a camera is rolling generally improves the conduct of both sides of an encounter. When tensions escalate, the body camera acts as an ‘independent witness’ providing the truth and holding individuals to account. Our body cameras, therefore, provide backup for the officer in contentious situations by being an unbiased ‘independent witness’.

2. Front facing screens reduce the use of force incidents

The front-facing screen is a proven deterrent. People see it, understand that they are being recorded, and moderate their behavior. A study with the Rialto Police Department found a 50% decrease in the use of force incidents as a result of body cameras. Front-facing screens in particular (a signature feature of Reveal's D-Series body cameras) have a proven calming effect and reduce aggression. Rialto is not alone. Reveal customers around the world have shown that the front-facing screen on their body cameras has a profound effect on interactions with the public:

“When people see themselves being recorded… – they can check their behavior because they know they’re being recorded” Officer Joshua Jones, Pasadena PD, CA

“The devices also had a positive impact on behavior. We found once someone was aware they were being recorded, their behavior changed – in some cases, it helped diffuse aggressive situations.” Stuart Ayres, Police Minister for Australia

“It stops situations getting to the point of violence. Most of the time people notice it [the Reveal body camera] without me having to say anything. Sometimes just by pointing at the display, they can see themselves and they realize they are being filmed [and] they just leave once they see the camera. It’s better than having a colleague next to you.” Othello, Security Manager at the Hard Rock Café, Sweden

“The front-facing screen is brilliant. You know you’re being recorded when you can see yourself on a screen... Not only does it defuse situations, but people then start apologizing.” Colin Green, UK

Reducing the use of force is a powerful way to fight the “militarization of the police” perception that some in your community may harbor, reducing the “us and them” mentality that gets in the way of trust.

Did you know that 60% of the population believe that community and police tensions would be reduced if officers wore body cameras? Furthermore, around 88% of people are in favor of body cameras for police. This positive statistic was initially uncovered in the Reveal 2015 Policing Perspectives Report, conducted by YouGov. It has since been shown in case studies that body cameras help to restore trust and confidence in law enforcement and public institutions generally. Essentially this means that over half of your community would immediately have an improved perception of their relationship to your department simply with the introduction of body cameras.

4. Body cameras are an independent witness

Being able to capture video and audio evidence will alone save an officer’s time transcribing detailed notes about every incident they encounter– up to 22% according to the UK’s Home Office. The technology’s hand in de-escalating aggressive encounters also leads to quicker resolution, allowing officers to be more available to help other members of the public. Furthermore, digital video evidence is very powerful and can make the justice system as a whole more efficient, saving money and keeping officers out of court.

Increased visibility and availability encourages contact, which is helpful when building trust with the community.

These are just four ways body cameras could help to build trust in your community, and there are many more.

To learn more about Reveal and how our body cameras could help build trust in your community, you can review our brochure, or call 888 269-9924 or email salesusa@revealmedia.com.