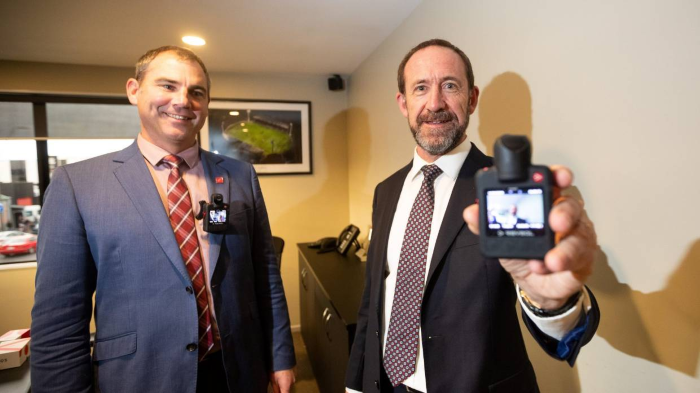 This piece was originally published here

Andrew Little doesn’t think there would be any problem in supporting the equipping of New Zealand police with body camera technology if Labour is re-elected to power.

Incidents of the public filming police have led to renewed calls for equipping frontline officers with the technology after a review in 2018 was dropped due to a lack of resources.

The Justice Minister and New Plymouth electorate Labour candidate Glen Bennett were in their home patch on Thursday and got to see the benefits of the equipment.

The country’s largest supplier is a joint venture between New Plymouth companies CERT Systems and Datatalk.

They are the Australasian distributor for Reveal, the world leaders in body-worn video camera systems, and demonstrated the advantages the technology.

CERT Systems managing director Brad Dannefaerd, who worked in compliance and enforcement at NZ Fisheries for 19 years, said the big advantage of the Reveal system was the forward facing screen.

“Immediately you are drawn to it, so if the offender starts to behave inappropriately they see themselves behaving inappropriately and sort of realise that is not so good so you get that de-escalation,” Dannefaerd said.

“It’s far better to prevent an incident from occurring in the first place than it is to simply capture evidence of it.”

Little said police were always looking to improve their performance and engagement with the community and believed body cameras were the ideal tool.

“They are typically dealing with some of the most difficult people in their communities and anything that can assist that by behaviour modification on the other side, and a consciousness on the police officer’s side, and de-escalate the situation and make it a better engagement has got to be a good thing.”

“It's exciting that this region has innovation is doing these types of things.”

Dannefaerd said the equipment resulted in considerable savings, with a 2016 university study finding it resulted in a 93 per cent drop in complaints against officers, a 70 per cent reduction in violence and aggression against staff and a 30 per cent fall in defended hearings.

“If you save one defended hearing or stop one officer being assaulted the camera has paid for itself.

“If a picture is worth a thousand words then what is moving pictures with sound worth?”