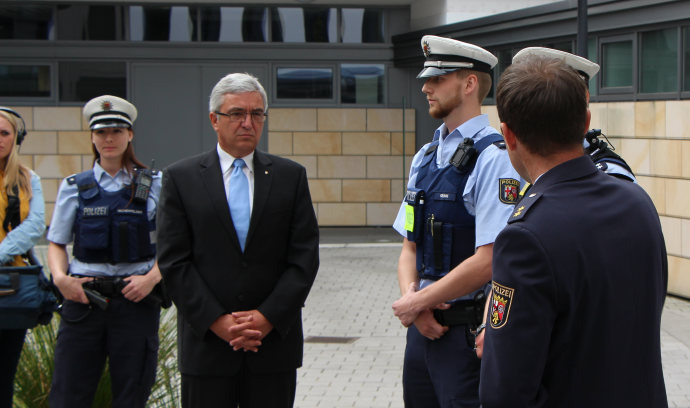 The Rhineland-Palatinate state of Germany has launched the use of RS2-X2 body cameras for police. In the neighbouring state of Hesse, cameras have been employed for some time.

Interior Minister Roger Lewentz has given the go-ahead for the introduction of Reveal body cameras in the Rhineland-Palatinate police.

"I see in the bodycam a tactical instrument to address the increasing violence against police officers," said Lewentz.

The use of cameras will be tested from July 1st in pilot projects at the police headquarters in Mainz and Koblenz, and accompanied by scientists at the University of Trier. 50 officials have been specially trained for the use of the first 15 cameras.

The use of body cameras is a preventive measure and should be used especially to control situations, where "problematic history" is a concern. As a result of the de-escalating effect Reveal cameras have due to a forward facing screen they have been said improve the intrinsic safety of the police officers.

"We must do everything to reduce violence against our police officers” stressed Lewentz. "I hope that the cameras have a deterrent effect on potential aggressors."

In Hesse, the effectiveness of body cameras is already proven.

Interior Minister Peter Beuth said "I am very pleased that the Hessian body camera model has proven to be suitable for preventing and protecting police officers from violent assaults.”

1,339 violent crimes were registered against police officers in Rhineland-Palatinate in the past year - 3.6 percent more than last year, a figure which has been shown to drop after the implementation of body cameras.

In Rhineland-Palatinate there is reassurance for those concerned about privacy. Hessen has already solved this problem for itself, by bringing a data protection officer on board. In addition, the Home Office has set strict rules for the use of cameras.

The clearly visible marking "Video/Video recording" would point to open data collection, also the RS2-X2 cameras show a flashing red light while on the overt recording mode. The use of body cameras are to take place exclusively in public spaces while the production of video and audio recordings is also governed by specific provisions in the "police and administrative authorities Act Rhineland-Palatinate".