In response to confrontations between staff and the public, Hong Kong MTR’s By-laws Inspection Unit testing the use of body-worn cameras. 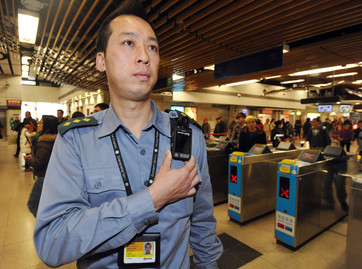 BIU staff will turn on their cameras when they see a need to record a situation, advising passengers that they have done so. MTR Corp says all recorded material will be ‘handled under a strict protocol which has been developed taking reference from guidelines issued by the Office of the Privacy Commissioner for Personal Data.’

The testing period will last six months in the crowded commercial area, with some MTR inspectors donning body cameras, according to Allen Ding, the operation manager for the East Rail and Ma On Shan lines.

The plan was announced as MTR officials planned out their crowd control plan for the Lunar New Year period.

The BIU was established in 2009 and comprises 59 members with a disciplinary services background, supported by more than 90 security staff. It has particular responsibility for the East Rail Line.

Already the Hong Kong Police Force (HKPF) have been using Reveal’s RS3-SX cameras in the region, having felt the benefits already. In turn Hong Kong has become a leader in the east of investing in body worn video technology, with countries such as Singapore following suit.

The HKPF will conduct a “thorough and comprehensive evaluation” of body-worn cameras once the trial ends in June 2015, a spokesperson said.