Our Body Worn Cameras: Designed with the Force in Mind

US police departments have always been at the forefront of using new technology to make their jobs easier and safer. In the late 70s, video technology began to sweep the force, as we saw the first cameras being equipped to police patrol cars. Back then, they consisted of a hefty VCR bolted to the floor of the patrol vehicle and a bulky camera that was mounted on a tripod in the back and pointed out of the front screen window. They weren’t inconspicuous and they took up a lot of space – but having video recordings of patrols and the incidents and arrests that took place saved police departments so much time that, by the end of the 80s, almost every US police department had multiple cars carrying the equipment. 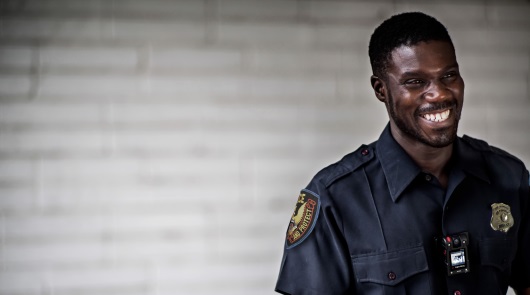 Today almost every patrol car comes equipped with a dash cam. The cameras have gotten smaller, recording quality has gotten better and they no longer require VCR tapes to function. The biggest problem with the traditional dash cam, however, is the fact that it only records what’s happening around the patrol car. This is why more and more US police departments are equipping their frontline workers with body worn cameras.

It’s the logical next step in the evolution of the police camera. The technology has reached the point that cameras are small enough to be completely unnoticeable to the carrier. Batteries and digital hard drives last long enough for multiple patrols and body worn cameras like the ones created by Reveal have been designed to be operated with a single hand. A simple clasp system makes sure the camera can be easily and securely fastened onto the chest gear of a patrolling officer, but also onto the dashboard of a patrol vehicle – and can even be used as a recording device when conducting interviews. The software used to store the recordings has also been designed with the force in mind. The videos can only be viewed with the correct software, which will indicate whether the footage has been tampered with. This guarantees that the footage can be used as irrefutable evidence in court.

However, the biggest advantage over the traditional dash cam is that our new body worn video cameras have a display on the front, showing the footage live to the person confronting the officer. Because they are aware of the fact they are being recorded, perpetrators will be on their best behavior. US police departments using our body worn cameras report a decrease of up to 90% in complaints issued against their officers, as well as a 50% decrease in force used against them. This means officers will spend much less time on paperwork and have more time available to protect and serve citizens.

Police body cameras deter crimes and create invaluable evidence. They are the next step in the evolution of the police camera, protecting civilians as well as the officers who carry them – and that’s why more and more US police departments are adding Reveal’s body worn cameras to their law enforcement armory.